Marion and Gen is my contribution to the "Requiem//102" project. The "Requiem//102" project is a collaboration between artists, scholars, and writers. Each contributor composes a response to one still frame from Darren Aronofsky's 2000 film Requiem for a Dream. My contribution forms an alternate biography for the character Marion Silver. The biography is pieced together from memories of Marion's cinematic past and future, with Jennifer Connelly's body working as a chief medium. For anyone interested, some brief notes are included after the video.

Marion and Gen - BW from Alla Gadassik on Vimeo.

If I didn’t already know that the predatory smile in this still image belonged to Requiem’s Marion Silver, would I be able to place the close-up within its proper film? The facial expression, with its defiant glare, could suggest Sarah Williams from Waking the Dead. The dark makeup and neglected un-dyed roots could belong to troubled Kathy from House of Sand & Fog. Perhaps this image even betrays Jennifer Connelly herself, flashing an unflattering smile during some 1990’s restaurant interview. How do we isolate this still photograph within a sea of images that contains the fictional, the real, and the ubiquitous in-between? Or, to give the question a more interesting formulation, how can the single image reveal its ties and bonds to all the others?

Requiem for a Dream does not give us much insight into Marion’s character or her past (unlike the family narratives of the two men in the film).
According to the scarce details provided in the plot, Marion Silver is the daughter of a wealthy clothing salesman from Brooklyn.
According to her online biography, Jennifer Connelly is also the daughter of a wealthy clothing salesman from Brooklyn.
Jennifer Connelly was a child model from a very young age.
Could Marion have also been a child model, albeit one with a less fortunate future?
What happened in Marion’s past that damaged her so much?
Why are her relationships with older men so fraught with unbalanced sexual power?
Jennifer Connelly often plays characters who have troubled and eroticized relationships with older/aggressive/unstable men. Her characters frequently suffer from addiction, alcoholism, memory loss, fragmented psyche.
Is Marion another node in this tapestry?

My film is a product of this game of questions, what-ifs, interesting links discovered among the still images of different Connelly films and media texts. Not least among them is a kind of facial repertoire and body language – the repetition and variation that forms the automatism of every Hollywood actor (something I explored in my previous film Meryl Strip).

Marion and Gen feels like a familiar story. Like a well-worn cliche about artistic duality. But then again, so does Darren Aronofsky's Black Swan. Strange...I embarked on a study of Aronofsky's decade-old film, only to arrive at his most recent work.

Or did I? In 1988, over a decade before she worked in Requiem, Jennifer Connelly starred in a little-known psycho-drama titled Etoile. In the film, Connelly is a moderately talented American ballerina who becomes possessed by the tortured ghost of a brilliant and ambitious Russian prima-ballerina. Over the course of the film, the pure and innocent American "white swan" turns into a darkly sensual and murderous black swan -- determined to give the performance of her life, even if it means destroying its host body in the process. Etoile was not a successful or well received film, and it is never mentioned by Aronofsky in interviews about Black Swan. He's probably never seen it. Still, I cannot help but wonder whether Aronofsky's Black Swan is also trapped in the elliptical fold of cinematic memory, channeling the heroine of Etoile through the body of the director's Requiem star. 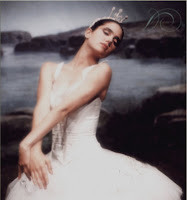